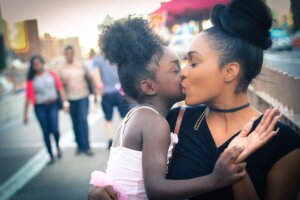 Women are beautiful creations put upon this earth to bless its prefecture’s and their significant other. With every woman, is an adventure—mysteries that awaken new journeys. No two souls are the same in feeling and towards understanding. What one has, is sacred and should be treated as such. Through true admiration, one will strive to see the difference of such voyage. However, with propaganda, coitus promulgations become arts of deceit. They are throwaway publications that feed the most inner feats—a dampening congestion that affects both men and women. Indubitably, these voiceless encounters speak more words than an individual’s plea for enmity’s liberty. These ideas are expressed in the articles “Struggling for Perfection” by Amy L. Beck and “The Issue Isn’t Sex, It’s Violence” by Caryl Rivers. Amy L. Beck argues that the outward publications of women are responsible for defining what sexy is and reinforce the belief that aesthetic appeal is a women’s highest virtue. Caryl Rivers shares the same sentiment in which she emphasizes that the lyrics presented within songs, induce violence and often does not acquire attention when said lyrics are directed towards women. Thus, upon hearing both wiles gone forth, the representations of women in the media and entertainment industry have a negative impact upon females.

One negative impact the representation of women in the media and entertainment industry have upon females consist of the subjection to manipulation. When reoccurring images of the “perfect woman” is absorbed by society, it requests that women lower their morals in order to comply with the new established norm. The request is never helpful to the development of women, for it tears down and destroy their current standing—their beliefs of what it is to be a woman. In the article, “Struggling for Perfection” Beck states that, “[Females] become convinced by the media and popular culture to believe that, as women, they should look a certain way and that only if they looked that way would they be loved and respected, [thus] they [turn] to dieting as a means of personal fulfillment and self-definition” (Beck 304). In other words, it becomes more of an incentive for a woman to fulfill these requirements. They desire the rewards that lie ahead but are not aware of the sacrifice needed in order achieve such success and transformation. Rivers makes a similar correlation in which she states that, “[Images] of women are not staying on the fringes of society. They are entering the mainstream at a rapid rate [and many] people regard what they see on TV as the truth” (Rivers 361). Therefore, women of society readily accept such portrayed images, for the idea of subjection helps with the transitioning and transformation of their appearance.

Moreover, the loss of one’s identity through prescribed conformality negatively impact females due to the presentation of women in the media and entertainment industry. When a movement trends, people follow without having consideration for the pivotal bane of their existence. They believe, if everyone is participating in such endeavors, then why shouldn’t they commit themselves to participating as well? Beck understands the initiative to follow such an appealing pursuit of happiness. She states that, “The power of popular culture to affect how we dress and how we behave is enormous” (Beck 305). This openness to change is forever welcomed, but of course, there are later unwanted strings attached. That is: violence against women. Rivers brings to fruition that “Violence against women, particularly in a sexual content, [becomes] legitimized in two ways: the increasing movement of images into the mainstream of the media in TV. Films, magazines, albums videos, and by the silence of it” (Rivers 362). As a result, men use this norm of accepted abuse as an excuse to do as they please. Their actions are often overlooked because “[V]iolence against women is greeted by silence” (Rivers 361). Naturally, having presided in a man’s world, women are preempted from their basic right to express who they truly as opposed to the doll in a house man wish them to become.

Ultimately, the representation of women in the media and entertainment industry has caused females to reject love and personal relationships within this contemporary age. The violence excused by those unaffected by it, has caused the birth of trust issues within women. This occurrence manifests because women lack the confidence and competence to engage in a serious relationship for they fear abuse is imminent. In the article, “Struggling for Perfection” Beck states:
In many cases, domestic battering [is] chronic, occurring weekly or daily whenever the victim broke some sort of household rule, such as serving dinner late or dressing ‘too sexy.’ The majority of sexual abuse victims [are] raped by people close to them: relatives, ex-boyfriends, or family friends. The men who committed these heinous crimes [are] rarely pathological rapists or batterers. They are men who view the real women in their lives in the same manner that they would view a Playboy model, a waitress a Hooters or a prostitute—as objects that exist solely for their pleasure and convenience. Men are not genetically predisposed to disrespect and abuse women. Their attitudes towards women [are] societally conditioned (305).
That said, women’s reactions to advances, however friendly and genuine, are just. It is hard to trust someone who may be under the influence of society’s norms because their intent is made known. It is more proper and acceptable unto women to dismiss these encounters for they become classified as threats to their existence. Under these circumstances, one is able to see why women regard men as the ordure and desecration to human society. In conjunction with this study, Rivers believe that, “[I]mages have a tremendous power to create an atmosphere in which violence against [women] is sanctioned” (362). Considering this is so, men’s behavior has no repercussions because there are no expectations that dictate what they can and cannot do. Thus, the philosophy of “boys will be boys” stays true to this day without any intervention or discretion.

Certainly, women objectification will always remain a problem as long as the media continues to reproduce dehumanizing images. It is hard to address the issue when females do not have the majority say in the content that is distributed within society. Furthermore, there is discontent in what is being done to resolve this issue on a societal standard. Although feminism movements spread awareness, it is still not enough to create the so desired change women seek. All that matters and all that has ever been requested is the establishment of equity, respect, and liberty for women. To attain such independence and power would be a step in the right direction for a revolution.

We use cookies on our website to give you the most relevant experience by remembering your preferences and repeat visits. By clicking “Accept”, you consent to the use of ALL the cookies.
Cookie settingsACCEPT
Manage consent

This website uses cookies to improve your experience while you navigate through the website. Out of these, the cookies that are categorized as necessary are stored on your browser as they are essential for the working of basic functionalities of the website. We also use third-party cookies that help us analyze and understand how you use this website. These cookies will be stored in your browser only with your consent. You also have the option to opt-out of these cookies. But opting out of some of these cookies may affect your browsing experience.
Necessary Always Enabled
Necessary cookies are absolutely essential for the website to function properly. This category only includes cookies that ensures basic functionalities and security features of the website. These cookies do not store any personal information.
Non-necessary
Any cookies that may not be particularly necessary for the website to function and is used specifically to collect user personal data via analytics, ads, other embedded contents are termed as non-necessary cookies. It is mandatory to procure user consent prior to running these cookies on your website.
SAVE & ACCEPT